Recently, T-Mobile and SpaceX announced a plan to provide networking services for smartphones. According to the announcement, this service will be available almost anywhere in the United States. It will be available through a new “Satellite to Cellular” service. Elon Musk also announced related information on Twitter today. He said the upcoming second-generation Starlink Internet satellite includes a mobile phone antenna, which can be connected to T-Mobile’s mobile phone in the United States, and can also connect to other carriers.

The new technology will take advantage of SpaceX’s second-generation Starlink satellites in low Earth orbit and T-Mobile’s domestic mid-band 5G spectrum to provide “near full coverage” in much of the United States, in addition to the territorial waters. If successful, the technology will eliminate “mobile network dead spots,” allowing users to stay connected beyond cell towers.

T-Mobile and SpaceX hope to go global in the future

T-Mobile and SpaceX said they hope to establish reciprocal roaming agreements with international carriers to offer the service worldwide in the future.

“This is important, it means your phone has no dead center in the world,” SpaceX CEO Elon Musk said at a press conference announcing the plan. “We’re very excited to partner with T-Mobile to do this together.”

T-Mobile said the “vast majority of smartphones” already connected to its network will be compatible with the new “satellite-to-cellular” service. Additionally, the satellite connection will use the smartphone’s existing cellular chip. Thus, there will be no need for a Starlink terminal or any other hardware. According to T-Mobile, the “vast majority” of existing smartphones will be compatible with its satellite-connected service, so the feature is unlikely to be used on Apple’s upcoming iPhone 14 models, which were previously supposed to have a satellite-connection function activated. Bloomberg’s Mark Gurman reported that iPhone 14 models may have satellite connectivity for emergency use. However, he also claims that Apple’s partner could be satellite company Globalstar, not SpaceX.

According to new reports, SpaceX plans to build a constellation of second-generation Starlink satellites in low Earth orbit. This new constellation of satellites will be equipped with first-class antennas. Additionally, it will also allow smartphones to connect through T-Mobile’s mid-band 5G spectrum without any additional hardware. T-Mobile claims the service would provide “nearly complete coverage anywhere a customer can see the sky.” However, Elon Musk claims it would also work when a person has their phone in their pocket or in their car.

What is a satellite connection used for? T-Mobile and SpaceX say the satellite-to-phone service is primarily designed for areas without existing cellular coverage to eliminate mobile dead spots. The service is not intended to replace faster cell phone networks in cities and suburbs. However, this is to ensure that people in areas without cell towers can stay connected for basic communication via text messages and possibly phone calls.

Where will it be available?

When and where will the service be launched? T-Mobile and SpaceX plan to launch the beta service in late 2023, beginning in select areas of the United States. The service will eventually cover most of the continental United States, Hawaii, parts of Alaska, Puerto Rico and US territorial waters. T-Mobile and SpaceX said they hope to establish reciprocal roaming agreements with international carriers to offer the service worldwide in the future.

What is the cost of this service?

How much will this service cost? T-Mobile CEO Mike Sievert said the company plans to offer Starlink satellite connectivity on its “most popular plan” at no additional cost. For some of the cheaper plans, T-Mobile may charge a monthly fee to use the service, which will be priced “much lower” than existing satellite service providers do, Sievert said. However, there is no exact information on the exact cost of this service in the United States.

What will this service support?

Does the service work with phone calls and text messages? What about iMessage? According to T-Mobile and SpaceX, Starlink’s direct satellite connection to smartphones will initially work with SMS and MMS text messages and “participating messaging apps.” However, the announcement didn’t mention any participating messaging apps, so it’s unclear if Apple’s iMessage service will be supported. 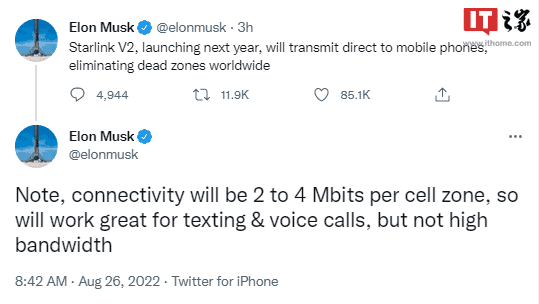 As for the network, Musk claims that the initial network speed is only 2-4 Mbps. It can only work effectively for SMS and phone calls.

Separately, Musk answered a question on Twitter about whether the connections would work with Tesla’s electric vehicles. Some cars are currently connected to AT&T’s LTE network. According to Musk, the answer is yes. 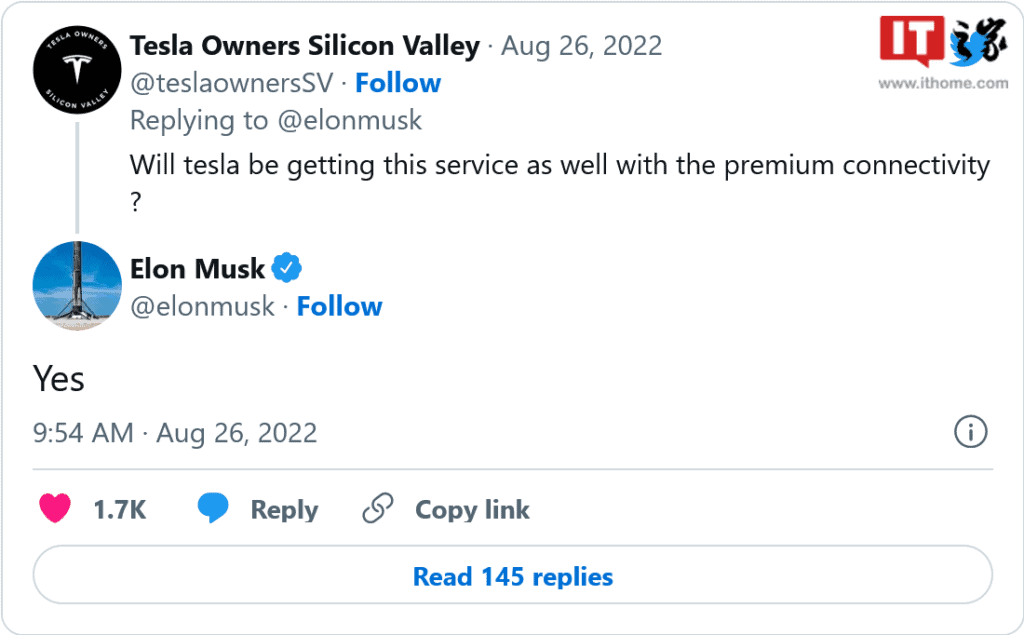 Tesla and SpaceX CEO Elon Musk said via Twitter that the second-generation Starlink will launch next year. This generation will provide connections for mobile phones around the world. The implication of this service is that it will eliminate mobile network blind spots globally. However, for now, there is no information on the specifics of this second generation Starlink.

SpaceX also plans to build a “Starlink” network of about 12,000 satellites in space to deliver internet services between 2019 and 2024. SpaceX launched another 53 Starlink satellites last week. The total number of Starlink satellites has now reached 3,108, of which about 2,845 are still orbiting the Earth.