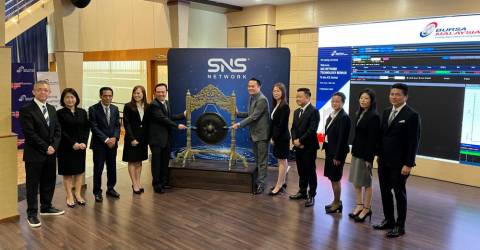 KUALA LUMPUR: SNS Network Technology Bhd is optimistic about its growth prospects on the prospect of a rebound in information, communication and technology (ICT) sales this year along with the economic recovery, said Managing Director Ko Yun Hung.

He said businesses and organizations were very strict with their spending during the movement control order due to the uncertainty, but ICT adoptions have increased significantly following the reopening of the economy and that the SNS has forecast the achievement of two years of delayed sales this year.

“The commercial segment has contributed 70% of our revenue over the past four years, so we believe we will be able to reap the benefits as individuals and businesses start spending again as they need to improve their existing ICT infrastructure, which has created strong demand for its Device-as-a-Service (DaaS) subscription-based service,” he told reporters during the company’s listing on Bursa Malaysia’s ACE market today. today.

SNS Network Technology debuted on the ACE market with an opening price unchanged from its issue price of 25 sen, raising RM90.72 million from the initial public offering, of which 34.1 % or RM30.9 million will be allocated to expand its DaaS subscription-based service.

It has also earmarked RM33.4 million of the proceeds for capital expenditure while RM2.5 million will be used to open 10 new retail stores in Klang Valley, Johor and Penang.

“At the moment, we are focusing on the short to medium term and the 10 new retail stores are expected to open over the next three years.

“Currently, our market share was around 1.47% and we hope to increase that figure,” he said.

Regarding its in-house brand, JOI, Ko said the brand will continue to develop products for the affordable market segment as there is always a good demand for affordable products, especially for entry-level devices.

“We would continue to align with this strategy and offer more products, such as a smartboard that would replace the conventional projector or whiteboard normally used in the classroom,” he added.

He said that JOI currently contributes 2% to the company’s revenue.

Up to June 30, SNS has registered 82 DaaS subscriptions worth RM255.86 million and received 75 inquiries from government agencies and listed companies.

The company launched JOI in 2014 by introducing the JOI 8 tablet to meet the demand for affordable ICT products while ensuring good product quality and specifications.