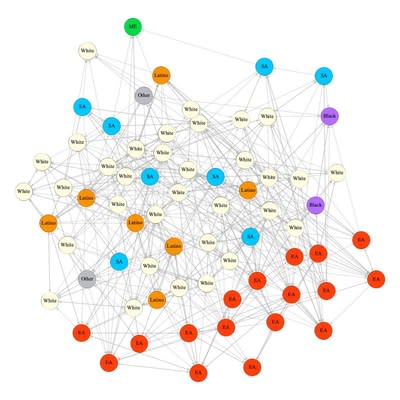 Professor Jackson Lu to MIT Sloan School of Management has spent the past five years studying this puzzling phenomenon commonly referred to as the “bamboo ceiling”. In his widely acclaimed research article published last year in the Proceedings of the National Academy of Scienceses, Lu and colleagues discovered that East Asians (e.g. East Asians do not fit the prototype of leadership adopted by mainstream American culture.

Now in a new research paper published in the Journal of Personality and Social Psychology, Lu revealed an additional mechanism contributing to the emergence of weaker leadership among East Asians: their greater propensity to network with members of their ethnic group (i.e. other East Asians), also known as ethnic homophilia. Lu’s new research shows that East Asians, but not South Asians, are less likely than other ethnicities to emerge as leaders in multi-ethnic environments, in part because East Asians tend to socialize more with members of their ethnic group.

“When a person frequently socializes with ethnic groups other than their own, that person is more likely to be seen as an inclusive leader who can bring together the values ​​and interests of different ethnic groups, an essential characteristic of leadership in environments multi-ethnic, ”says Lu.

To study the “bamboo ceiling” phenomenon from a social media perspective, Lu conducted three studies at multi-ethnic law schools and business schools in the United States – the sources of future leaders. First, he analyzed a large survey of 54,620 students from 124 U.S. law schools and found that East Asians had higher ethnic homophilia than all other ethnicities (whites, South Asians, Blacks, Latinos, Middle Easterners and Native Americans). Using a social media analysis, the following two studies examined friendship networks and the emergence of leadership in 11 classroom sections of new MBA students at a US business school; Professor Lu found that East Asians were the least likely to be nominated and elected as leaders. The lower emergence of leadership among East Asians was partly explained by their higher tendency to socialize with members of the ethnic group (i.e., other East Asians). These results held steady even after controlling for factors such as individuals’ assertiveness, general popularity, English proficiency, US / international status, and personality.

To note. “EA” = East Asian, “SA” = South Asian, “ME” = Middle Eastern
This friendship network of an MBA class section demonstrates the high ethnic homophilia of East Asians. Compared to other ethnicities, East Asians were more likely to socialize with their ethnic groups (i.e., other East Asians).

Lu’s research highlights a potential challenge for East Asians by the cultural mismatch between their ethnic homophilia and the social relational dynamics required to become leaders in America’s multiethnic community.

Lu notes: “Society should be aware of the under-representation of East Asians in leadership roles, rather than assuming Asians are the model minority” who are doing very well “. To help East Asians break through the bamboo ceiling, organizations can consider creating networking opportunities for interethnic interactions, such as mentorships and interethnic lunches. “

More generally, Lu’s research sheds light on an important question: how can individuals achieve leadership in multi-ethnic environments? “To emerge as leaders, individuals must step out of their cultural comfort zone and socialize with other people of different ethnicities,” says Lu.